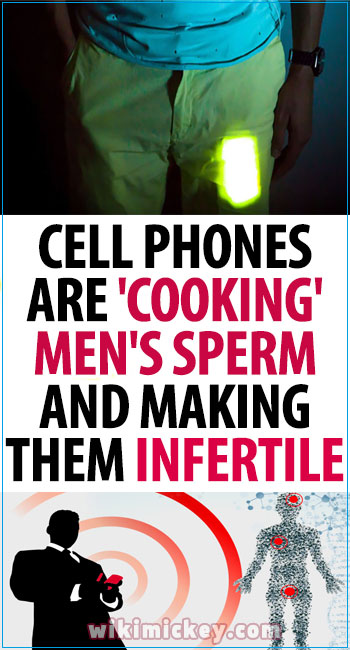 “Some fish are better left un-fried.”

It looks like it might be time for guys to start carrying their phones in purses, or backpacks, or maybe in a little cap on top of their heads, because new research out of Technicon’s medical school in Haifa, Israel has found that keeping a phone in your pocket delivers a serious blow to a man’s sperm count, leaving him less fertile.

Fertility experts examined 100 men who were attending a fertility clinic for a year and found that men who use their phones for as little as an hour per day, or kept phones nearby throughout the day, are “cooking sperm” and significantly lowering their sperm levels to the point that they might find conceiving to be difficult.

Men who kept their phones in their front pockets all day were seriously affected in 47 percent of the cases, as opposed to just 11 percent of men in the general, non-cell phone holstering population at the fertility clinic.

Researchers think this is being caused by electromagnetic activity from the phone that heats up (or “cooks”) the sperm.

The study also found that men who sleep with their phone on their bed, or on a nightstand next to the bed, also had decreased sperm levels compared to men who didn’t sleep with phones in the immediate vicinity.

To help men avoid totally destroying all of their sperm, Professor Gedis Grudzinskas, a fertility consultant St. George’s Hospital London and in Harley Street offers some advice. “If you wear a suit to work put the mobile in your chest pocket instead of close to your testes,” he told The Telegraph. “It will reduce the risk of your sperm count dropping or dropping so much.”

A similar study that examines the effects cell phones have on women hasn’t yet been done, but as Martha Dirnfield, a researcher from the study, said, “women generally don’t carry their mobiles on them so maybe a mobile phone won’t affect their fertility.”

Yikes, so this is really just bad news for men at the moment. Maybe sleep with your phone in another room?

Definitely made that switch from briefs to boxers, and consider maintaining a wide radius between your dick and your phone.

That thing is dangerous.

You can also watch this related video;